The Keepers of the Hills, two brothers they were, did toil hard and true on bourbon barreled brew. Each did contribute fully half of inspirations gleaming gift and, as I’ve said before, the little town betwixt said hills did glory in libations lore.

October it was, that time of year when change must come. When the leaves shake colors’ jade and All Hallows Eve is a looming eerie shade.

Was on just such a day as this the Horseman did step from the Boar’s Blanket Inn into the cubbled street to see the brothers deliver a rolling barrel of brew.

Now contrary to what you may have been told, the Hessian, that dark rider of Halloween does walk the world all year through. But what of Halloween you ask? Why so special? Why, the Hessian may be a common enough sight in our small town, but you see… How to explain? Ah, I have it. You see and speak and I see and speak but he… he does not, but for the Hollowed season, the Horseman goes without a head.

It is only upon the witching season, when there be pumpkins aplenty, and Jacks are alite, that poor old Ned –for that is his name true- can carve his anger and despair into ochre flesh. Building eyes of malice to stare his frightful glowing scare, and mouth of envy to shock and frenzy. Becoming the legendary fear, the chaser, the trickster.

Back to our story then…

The brothers made cautious by Ned’s new-found head, did nod and comment upon the fine fearful qualities and perfected perorations of the newly hollowed and flicker-eyed face. Ned did nod and stepped aside as the brothers sloshed the barrel through the door and disappeared inside.

A thought did form within the flame of Ned’s empty fired head. An ale for the season that’s what the town needs. The Keepers suds are good enough, but with a face I can taste. It only fits too well that I should make this brew a special spell. He looked back over his shoulder into the darkened inn his mind already working a trick to spin.

Up the street to the pie makers place he did skip and entering, he did move directly to the spices arrayed all in a row. Without a look at the Baker’s stare, he flipped the lid on his empty skull and began to spice the meaty haul. He worked in a cloud of cinnamon and nutmeg, clove and allspice. He smelled of pumpkin pie as he slid back out, took two steps and slipped through the door under the boar’s snoot.

The brothers stood in the gloom laughing and sampling the new wares with the innkeep. Oh, but they took pause when Ned loomed with that fat melon head, slit grinned, and narrow eyed, the aroma of clove and cinnamon beside.

“May I?” Ned says, in tricky voice. Stepping up without wait, he knocks the lid from inebriations well and loudly inhales the smell.

“Ah, a fine one you have brewed, but finer still we may weave for this All Hallows Eve.” And pulls his head from his shoulders, letting the ochre cup dip deep. He swirls and whirls it about, finally pulling it forth and raised in mocking toast, he tips full pumpkin high and leta ale down gullet, sink.

His dripping head now back in place he grins his thin-sliced grin. “Ah, now that’s more my style, an ale to fit seasons wile.”

Without another word or backward glance, out the door he trots. Nothing moves within. Then one brother steps up and dips his cup.

“Well how is it?” the other brother does state.

“Needs less spice, more pumpkin,” The others only advice.

Below are the tasting notes I took while drinking Alltech’s Pumpkin Barrel Ale. If you tasted this beer, please share your thoughts with me in the comments below.

Pours a rich amber color, not unlike bourbon. A finger high head of off white foam forms, but topples quickly leaving a skin of bone china froth in the middle of the glass. Carbonation rises in drifts and gouts, keeping the island from completely collapsing. Extremely clear, like looking at a world bathed in amber resin.

The first thing that comes to mind when I dip my nose to glass is pumpkin bread. But on the second dip I can’t seem to recreate the smell. I still catch some spicing (nutmeg mostly), vanilla and oaky alcohol. No malt or no hops at all.

Mouthfeel is quite pleasant with that same buttery smooth texture I found in the straight Bourbon Barrel Ale. It has medium body, medium carbonation, and plenty of warmth. No bittering.

Taste is not restrained in the least here. It starts with a slight brown sugar sweetness at the front along with tendrils of hard-to-distinguish spice. If the front could be considered restrained the mid-palate is like a slap in the face with a bourbon barrel. Bourbon is the lead bully with vanilla backing him all the way. Really the only thing the spices do is augment the already huge warmth of the bourbon.

Really no pumpkin. Though on a couple sips I thought I caught the ghost of a pumpkin flavor behind the bourbon, but this may just be wishful thinking built out of the spices. If it’s there it’s very weak. Very little base beer presence in the form of malt or hops. Swallow leaves some heat in the throat and an alcohol-sweet aftertaste.

Vanilla and bourbon over play their welcome in this one. The vanilla over expounds especially, coming through way to heavy. It’s also very sweet, almost cloyingly so.

It isn’t a terrible beer. I could see sipping on this and enjoying its warmth mid-winter (long after it’s out of season), but there isn’t much here that makes it a pumpkin beer. Alltech states it brews this ale with real pumpkin but it must be ninja pumpkins because they’re sure hard to find. They either need to lessen the time “in barrel” to reduce the vanilla and bourbon or up the pumpkin.

If you love bourbon go ahead and pick this up, you may even be able to convince yourself every few sips that buried in there somewhere is some real actual pumpkin. 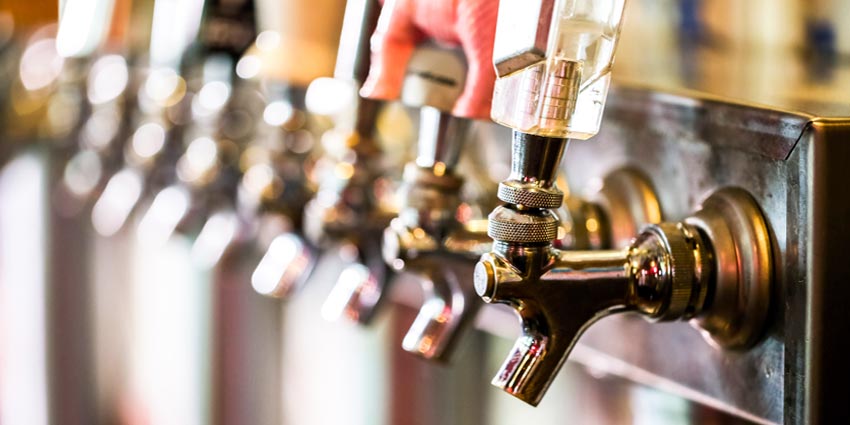