Founders Brewing Company is well known for their barrel aged beer. Their first barrel aged beer was KBS back in 2002 and the program has continued to grow across the years. In 2007, they moved the barrels underground into an old gypsum mine about 90 feet underneath downtown Grand Rapids.

The growing popularity of everything barrel-aged in the craft beer world seems to have prompted further expansion. Early last year, Founders added a second brewery location which will focus heavily on barrel aging and experimental beers.

Barrel aging now stretches into three categories in their lineup:

Frootwood is the first release of this new exclusively barrel aged series. There are six offerings planned this year for the series, of which KBS and Backwoods Bastard are the only other two known to the public at this time.

On the surface, Frootwood looks like quite the oddity. According to the Founders website, it is a light bodied cherry ale — something like their Cerise probably — which is then aged in oak barrels that were used to age bourbon and then maple syrup. Any out there who are familiar with Founders may recognize this setup. It’s the same one used to age their much sought after and rarely brewed Canadian Breakfast Stout.

It’s on odd combination, I know. A light fruit beer aged in not just wood, but wood that has both held bourbon and the sweet strains of maple syrup.

I’m really not sure what to think. I like trying new off-the-wall beers and sometimes they even hit upon an epiphany. If nothing else, Frootwood, and Lizard of Koz for that matter, which many didn’t like at all, speak to Founders motto “Brewed For Us.” 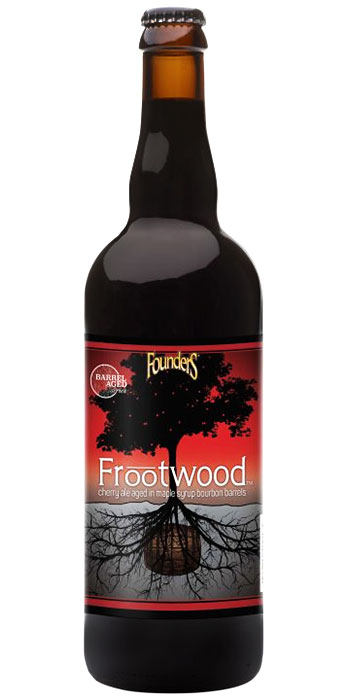 Below are the tasting notes I took while drinking Founders Frootwood. If you tasted this beer, please share your thoughts with everyone down in the comments below.

Frootwood sits a golden tinged rose color in the glass. In good light, it almost takes the appearance of a slightly rosy brass. Clean white, soapy foam rises to about half a finger. Clarity is superb.

Aroma is more subtle than I was expecting it to be. No huge bounces of cherry here. The cherry is there, but restrained, nestled in with vanilla, wood, spice, and very low whispers of bourbon. There’s a slightly sweet tartness to the smell, undoubtedly from the cherries.

Body shows a low medium, light yet having a rounded depth. Mouthfeel is mellowed and turned slightly mouth coating by the barrel aging. It’s still got a spritzy factor, but smoothed out some.

The bourbon and wood step out first right at the front of the palate. Cherry rides low at the front too and it is tempered by the wood and a thin flash of maple sweetness before extending into a somewhat tart mid-palate with the cherry taking a bit more of the attention. The maple syrup and spice rise in whispers toward the back before washing away in a clean, slightly drying finish. The aftertaste is an almost indescribable pleasure of candy-like spice, cherry, and maple sweetness.

This may be one of the most unique beers I’ve had in awhile. The singular taste of Frootwood will likely be both the draw and downfall for many.

I liked it, others will not. For all those who thought Lizard of Koz was too sweet, this one is less so, though surely not enough to make everyone happy.

The cherry is interesting with the wood and bourbon, and comes through tart and sweet but not quite medicinal. It’s not like drinking cherry Nyquil. The finish is something to linger on and try to dissect. That flash of mild maple along with the bourbon spice quieting the cherry and setting up an aftertaste so oddly interesting you just have to take another sip so you can sit there smacking your lips and trying to figure the whole thing out.

Another quality I appreciated was its lightness. For a barrel aged beer, it has a lower ABV and the spritzy cherry ale base rounds it out, but stays playful. It doesn’t sit as heavy on the palate as other darker barrel-aged offerings.

Frootwood is definitely worth a try. Maybe if you can, buy a single before you go all in for the 4-pack, just to make sure it’s something you want to explore further; though you may need more than one bottle just to start figuring this one out.