Growing Hops Right At Home Is Easier than You Think

Home brewing is becoming increasingly popular as more and more beer lovers discover just how easy it can be to a cook up a batch of your very own creation. An integral part of the home brewing process are hops, which infuse beer with its signature flavor. While some home brewers choose to purchase hops for the brewing process, many are choosing to grow hops on there own. Hops are the female flowers of the plant known as humulus lupulus. Hops are used as a means of flavoring beer, as well playing a role in preserving the beverage. Hops offset the sweetness of malt to create a complex flavor profile that beer lovers crave. Depending on how much and what type of hops are used will determine how bitter a beer may be.

Hops were used as a method of flavoring beer as far back as the 11th century. Before then, many brewers imparted flavor to their beer by use of a variety of herbs and flowers. The resulting brews contained far less alcohol content, and were also more susceptible to spoilage.

Today, hops are an integral part of the brewing process, with many growers taking a scientific approach to this age’s old traditional preparation.

Each of the numerous varieties of hops offers a unique flavor profile. There are many different hop varieties out there you can use to brew your beer. Here are just a few well-known hop varieties, along with a brief description of what they do for your beer:

Just about anyone is capable of growing hops right in their own backyards. The process starts with procuring rhizomes, which are root segments are taken from older plants. These can be found from a number of reputable dealers all over the country. Growers can also purchase potted hops plants, which can then be planted in their home gardens.

Maintenance of hops plants is relatively easy, as they are robust enough to withstand many different environmental factors.

It’s best to choose a sunny spot for your hops plants. You’ll also need a means of support as they grow. Hops plants climb as they get bigger, and many growers construct wire supports, which allows the hops plants to curl upward. This is recommended as some vines can grow well over twenty feet long.

It’s best to plant your rhizomes at least three feet apart, at a depth of about one to two inches. Plants will grow exceedingly fast at first, with plants sometimes growing a foot per day. It’s best to do your planting early in the spring, once frost is no longer a concern. Take care when watering and fertilizing your plants; too much or too little can prove detrimental to your yield.

Harvest ranges from mid-August to mid-September depending on where you’re located. When harvesting, one should be aware of what to look for to indicate whether your plants are ready.

Smell is important in this capacity, as well as the look and feel of the plants. Hops will smell most pungent when ready for harvest, and they should appear light in color and feel dry to the touch when ready. Once harvested, hops should be dried before being incorporated into beer. This can be done using an oven, food dehydrator, or a self-made hop dryer.

Without the addition of hops, beer just wouldn’t be the same. Growing your own for brewing purposes can be a great experience for both master brewers as well as novices. A small home garden is all you need to take your home brewing to a new level.

Planting Hops Around Your Pets

The toxicity can range from mild to severe, and depends on many factors, including the size and breed of your dog, as well as how much they ingested. Symptoms to look out for include: heavy breathing, anxiety, stomach pain, vomiting, extremely high temperatures, elevated heart rate, and in some cases, death. If you suspect your dog has ingested your homegrown hops or hop pellets, then it is highly recommended that you get them to an animal hospital immediately. 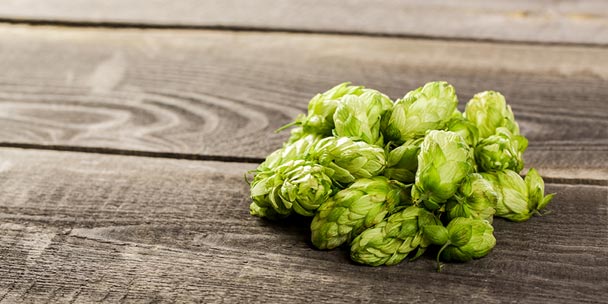 By Jeff Flowers
30 Comments
#gardening#hops#how to#howto#tips
Beer EducationBeer InfoCool StuffHomebrewing
Certain content that appears on this site comes from Amazon Services LLC. This content is provided 'as is' and is subject to change or removal at any time.