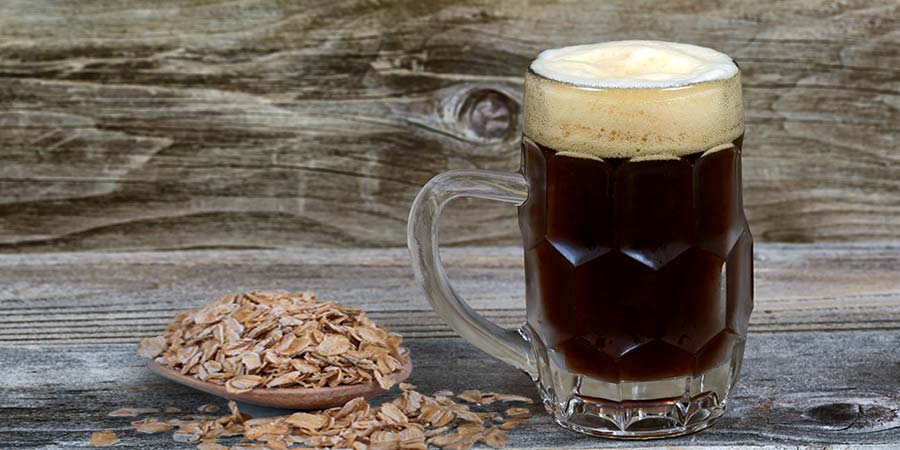 Look at the beginnings of any modern stout and you’ll find the porter. Every stout, including Dry Irish, American, Imperial, and Oatmeal are rooted in the porter heritage. As I’ve talked about in other stout profiles, the first use of “stout” in reference to beer can be traced back to at least 1677, where it was used to describe a stronger version of the common dark beers of the time. These early “dark beers” really have no modern equivalent, though they would be most closely related to the English Brown Porter.

The beer of this time period was commonly made with barley malted and toasted in rudimentary ways. Different strength brews were mixed to arrive at a desired character. These final products invariably were of a brown color and had a variable smoky quality due to the malt processing. The more hearty, or stout, of these products would have likely retained the descriptor.

The word stout would become more exact as beer production advanced. It would continue to describe a beer’s strength through the early 1700’s when a refining of the British brown ale took place to compete with the rising popularity of the new and fashionable paler ales. This evolved brown ale would rise in popularity to finally gain the name Porter, allegedly through it esteem with London’s dockyard working class. The popularity of porter radiated outward from Great Britain to Ireland, Russia, and even India.

Ireland took to making their own versions of this beer in the mid 1700s. The Irish especially fancied the “stout porter,” a porter recipe brewed with less water to make the beer strong. This particular beer seems to be the bridging connection between porter and stouts. It was also known as “stout butt beer,” and finally just as stout. Though, the use of stout, on its own, would not come to common use until after 1817 and the invention of drum kilning.

Daniel Wheeler’s drum roaster put kilning malt out of direct fire exposure, eliminating the smoky flavors, and allowing better control of kilning temperature and time. Porter brewers were no longer restrained to using brown malt. They were now able to get their hands on malt with a vast assortment of new colors and flavors including pale malt and black patent malt. They found they could brew a truly dark beer with a grain bill of pale malt and a small amount of dark patent.

Among the first brewers to embrace this new technology was the brewer’s at St. James Gate Brewery in Ireland. This new, roasty, dark creation was named Extra Stout Porter and later shortened to simply Extra Stout.

Oats, no doubt, found their way into ancient brew pots long before the stout was born. It was an abundant crop and the oldest evidence of its cultivation comes from Bronze Age Switzerland. How widely it was used in brewing is less certain, though it seems to have fallen out of favor as other grains came to the fore. Oats grow well in both England and Scotland, so it isn’t a big surprise that it would reemerge as a brewing ingredient at some point. That point came in the late 19th century, and may have had more to do with a marketing gimmick extolling the health benefits of certain stout styles. Milk stouts, were promoted as an elixir to nursing mothers and Oatmeal stouts as a tonic of strength and health, as evidenced in this advertisement in the Saturday 27 January 1894 issue of Aberdeen Journal:

Oatmeal stouts continued to grow in popularity, even sparking some patent disputes between breweries, but by the end of World War II the style’s prominence had begun to wane. By the 1970s the style had exited the scene. But the style just wouldn’t stay dead. In 1980, Samuel Smith brewed their Oatmeal stout ushering a new wave of popularity in Europe and extending the style’s influence into the U.S.

Characteristics of an Oatmeal Stout

The guidelines for the Oatmeal Stout beer style are set by the Beer Judge Certification Program (BJCP) Style Committee. The below details are a summary of what an Oatmeal Stout should represent.

Lightly sweet aromas of malt along with some roastiness. The roast often has some coffee-like qualities to it. A nutty hint of oatmeal may be recognized. Fruit character should be mild to medium-high. If hop aroma is present it should remain slight and have a character earthy, floral presence. Diacetyl can appear in low quantities.

It should have a medium-full to full body. Medium to somewhat high carbonation. Should present as smooth and velvety on the palate with a possible oil-like slickness from the addition of oatmeal.

Follows aroma to a degree. Oats can add an earthy, nutty, and/or grainy quality. Dark grains balance the sweetness from malts and may present as a milk chocolate or creamed coffee character. Low to somewhat high fruit flavors can be present along with mild tunes of roasted coffee. Medium hop bitterness helps balance the malt, with the scale favorable toward the malt.
Hop flavor follows the aroma with medium-low hints of earth and floral qualities if present at all. Diacetyl is between med-low and none.

EXAMPLES OF THE STYLE

If you’re interested in brewing your own Oatmeal Stout at home, here are a few things you should know going into it. 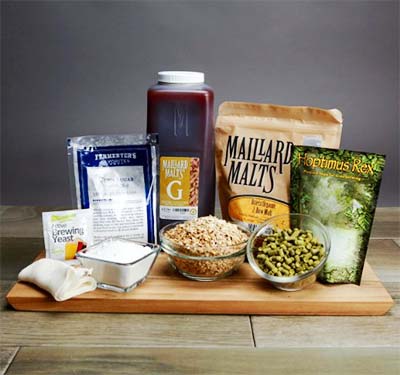 The deciding difference between this stout and other stout styles is the use of oats in the grain bill.

The bulk of your grain bill will be made up of British or possibly American pale malt. This can make up 60-80% of the bill.

In most cases the amount of oats is kept somewhere in the range of 3-12% of your grain bill, but it can go as high as 30 percent. Using higher than 30 percent creates a bitterness and astringency in the finished beer.

Don’t overlook the opportunity to toast your oats. Toasting all or a portion of the oats will increase their flavor contributions to the beer. You’ll have to experiment a bit to get your favored mix of flavor and mouthfeel.

Baking the oats is quick and straight forward. All you need is a baking sheet, oven, and (ideally) an oven thermometer. Spread the oats out on a baking sheet — less than an inch thick — and place them in the oven at 300°F for 10 to 15 minutes. Stir them around a bit, resettle them, and stick them back in for another 10 or 15 minutes. Keep doing this until you get a golden color and a nutty, oatmeal cookie type aroma. Don’t over toast them. This will create too many unwanted astringent flavors. Also it’s worthwhile doing your toasting about a week before you brew, giving the oats time to “air” any astringent character.

Oats have to be mashed with malted grain otherwise none of the starches in the oats will get converted and these starches are not available to the enzymes until the oats are gelatinized (cooked).

In the case of the flaked oats available to homebrewers and the rolled oats you find in your local store, this gelatinization as been done for you. These can be added directly to your mash.

If you happen to buy oats that have not gone through the cooking process, such as steel cut oats, don’t worry, just pretend you’re making breakfast and cook them up first. Add two gallons of water per pound of oatmeal and cook, stirring frequently, until it becomes a uniform consistency throughout. Then add to your mash.

As far as I know there is no real advantage to buying these unprocessed oats, beyond a small price difference. And having to perform the gelatinization process yourself, will add as much as two hours to your brew day.

After Pale malt and oats come a slew of options:

If you are an extract brewer, be warned: Oats require a mash. You cannot do this style justice without at least a mini-mash. So, if you aren’t ready to start messing with grains you’ll probably want to pass this style by for now.

For a mini-mash, combine all your specialty grains (what you would have steeped) along with about a pound of pale malt and the oats. The pale malt will contribute enough enzymes to deal with the oats and specialty grains. Follow the same process outlined in the mashing section.

Hopping rates are low and geared toward a low to moderate bitterness, with minimal emphasis on aroma and flavor. It is rare to use finishing hops or do dry hopping.

If you are using less than 10% oats a single infusion mash can be used without running into sparge trouble. The sparge will likely be longer than usual no matter what, due to the oats, but if you use more than 10%, the beta-glucans — what makes oatmeal gummy — can make sparging very bothersome. Think of that last gummy bowl of oatmeal you had and imagine trying to sparge through it.

Using rice or oat hulls wouldn’t be out of the question. You can also try a two-step mash with a 20 minute rest between 98°F and 113°F, which will help the beta-glucanase enzymes break down the beta-glucans. After this raise your temperature to a scarification temperature of around 153°F and hold this for 60 minutes. After the time is up raise your mash temperature as quickly as possible to above 168°F to stop enzyme activity and keep remaining starches and glucans liquefied. Sparge to boil volume with 170°F water.

English yeast is traditionally used in the style. What variety you use is going to depend on what sort of mouthfeel and body you want in the finished beer. If going for traditional, you’d be looking for a yeast with slight ester production, and a somewhat sweet finish — Wyeast 1318 (London III), White Labs WLP002 (English Ale), or Danstar Winsor dry yeast are good options. If you’re looking for a drier take on the style try an Irish Ale yeast.

If using liquid yeast, make a yeast starter or use two packages, so that you have a bumping crop of healthy yeast.

In the case of dry yeast, cast more than the stated minimum. With most dry yeast the manufacture minimum is one satchel, so rehydrate two and cast. You want enough healthy yeast in there to eat most of the residual sugars.

It is a good idea to step up your fermentation temperature over a number of days if using a low or medium attenuating yeast strain. This will push it to go the entire distance and not fall out too early. Start at the low end of your chosen yeast’s temperature range for a couple days, ramp the temp up slightly every two or three days, until you come to rest somewhere between 70°F and 75°F — again dependent on your chosen strain. In all you should have 3 to 4 temperature increases.

A low carbonation volume of around 2.0 volumes is about right for a room temperature served authentic oatmeal stout. If you want it a little more sprizzy you can go a little higher, 2.5 volumes or so.

After bottling, your much anticipated oatmeal stout will likely be quite harsh. Don’t be disappointed! Most stouts need a couple months of aging to allow their profiles to round and mellow. If your patient you’ll be drinking a smooth and velvety stout before you know it.